Here is the starting point of the revolution and the battleground between Irish settlers and British Redcoats for the freedom on the North American continent. It has its own very unique flavor inspired by the 'Tea Party' which signified the start of the war and the Constitution's creation. Today, the city is an example where the old and new have perfectly created an entity filled with Irish pride, temper and Italian charm. Words are not enough - you must come and experience it on your own.... 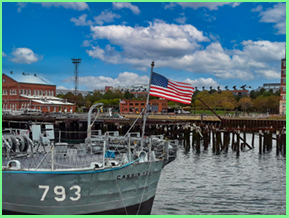 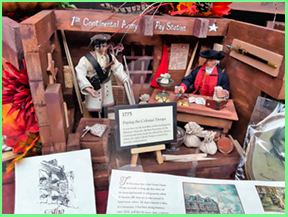 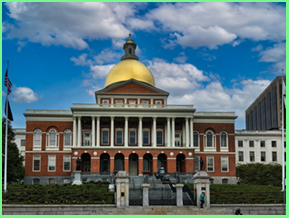 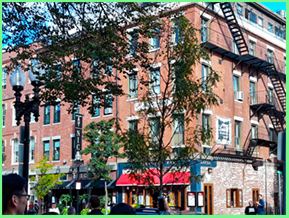 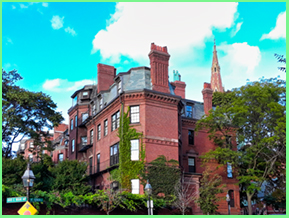 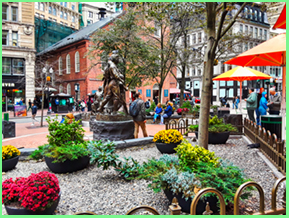 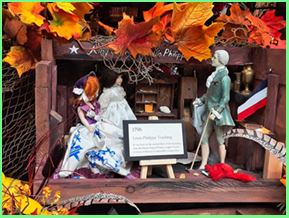 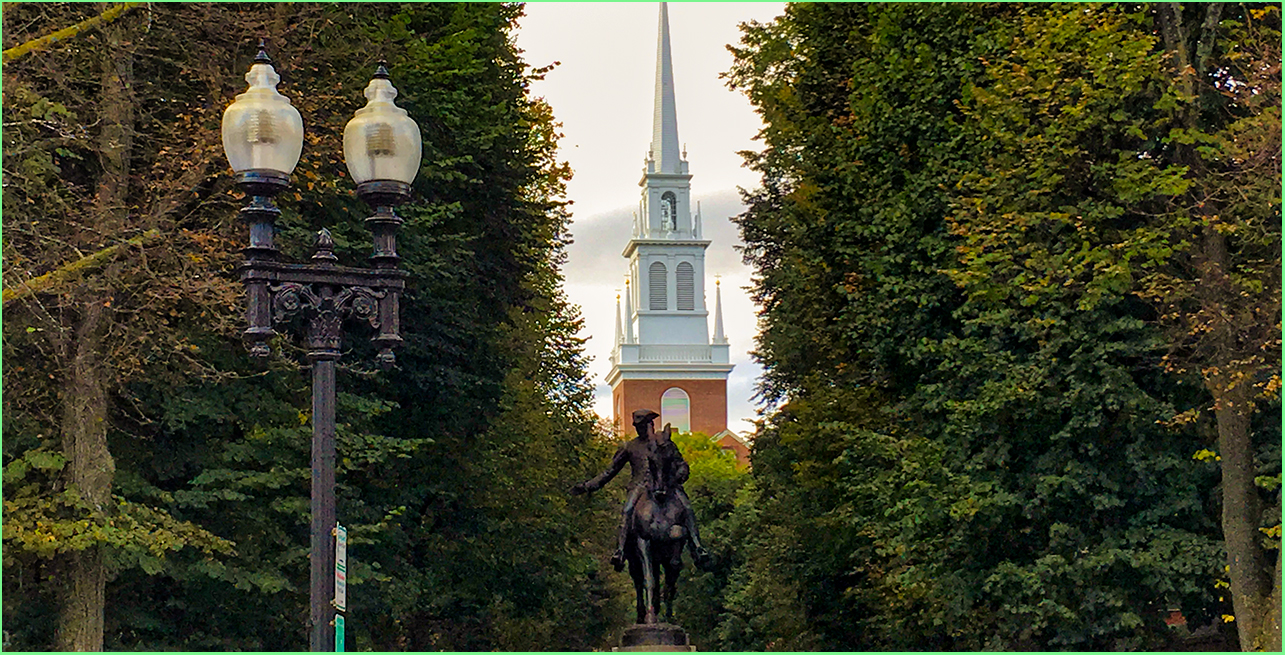 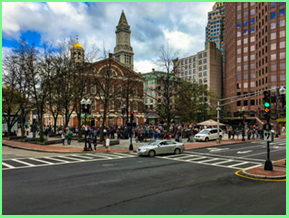 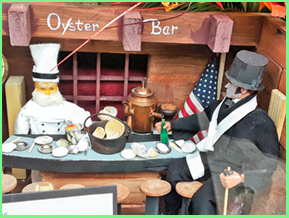 Boston is one of the oldest cities in the United States, founded on the Shawmut Peninsula in 1630 by Puritan settlers from England. It quickly became the political, commercial, financial, religious and educational center of the New England region. The American Revolution erupted in Boston,

Early Boston was a hilly peninsula originally inhabited by the Massachusetts tribe of Native Americans who have lived in the area since 2400 BC. The tribe called the area Shawmut and the nearby river, which is now known as the Charles River, the Quinnebequi.

By 1618, more than two thirds of the Massachusetts Indians living in the area were wiped out by yellow fever and small pox brought by European traders. Only 25,000 Indians survived.

Reverend William Blackstone, an Anglican clergymen, moved from Weymouth to Shawmut in the area that is now Beacon Hill. This made him the first settler to live in Boston.

In September of 1630, the colonists officially named their new town Boston after their hometown in England.

More Puritans continue to immigrade from England and in 1632, Boston was officially named the capital of the Massachusetts Bay Colony.

While the Native American population declined, the number of settlers flourished. By 1676, Boston had 4,000 residents.

More than two-thirds of inner Boston's modern land area did not exist when the city was founded, but was created via the gradual filling in of the surrounding tidal areas over the centuries.

The Freedom Trail winds its way around the city, connecting 16 historically significant sites with more than 250 years of history along the red line.

These are the places where history unfolded making each site as an authenticate treasure.

The Freedom Trail is a unique collection of museums, churches, meeting houses, buying grounds, parks, a ship, and historic markers that tell the story of the American Revolution and beyond.

Really, we should agree to the statement that Boston is a huge outdoor history museum.

Boston Harbor is a natural harbor and estuary of Massachusetts Bay, and is located adjacent to the city of Boston. It is home to the Port of Boston, a major shipping facility in the northeastern United States.

It has been an important port in American history. It was the site of the Boston Tea Party as well as almost continuous backfilling of the harbor until the 19th century.

The Tea Party was the culmination of a resistance movement throughout British America against the Tea Act, which had been passed by the British Parliament in 1773.

Boston Common, located near the Financial District and Beacon Hill, is the oldest public park in the United States.

The Common was used as a camp by the British before the American Revolutionary War, from which they left for the Battle of Lexington and Concord.
It was used for public hangings up until 1817, most of which were from a large oak which was replaced with a gallows in 1769.

During the 20th century, Charles Lindbergh promoted commercial aviation; Anti-Vietnam War and civil rights rallies were held, including one led by Martin Luther King, Jr.; and in 1979 Pope John Paul II gave Mass to a gathered crowd.
Today, Boston Common is still open for all to enjoy.

According to the Boston Preservation Alliance, 'Buildings in this style link the ancient democracy of Greece with the civic ideals of the young American republic.'

These three types are built mostly in the Federal and Greek Revival Style. According to the Boston Preservation Alliance, the Federal Style is known for classical columns, three-part windows, and flat facades. The State House is a typical example of this style. Greek Revival is known as a simpler version of Federal Style. Buildings are often constructed with Quincy granite or brick. 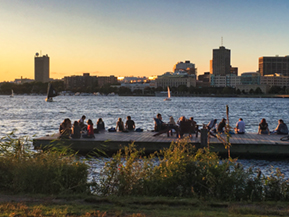 People of West Indian and Caribbean ancestry are another sizable group, at 6.0%, about half of whom are of Haitian ancestry

Over 27,000 Chinese Americans made their home in Boston city in 2013. It is the only surviving historic ethnic Chinese enclave in New England since the demise of the Chinatowns in Providence, Rhode Island and Portland, Maine after the 1950s.

Boston has teams in the four major North American professional sports leagues plus Major League Soccer, and has won 37 championships in these leagues.

As of 2017 it is one of four cities (along with Chicago, Los Angeles, and New York) to have won championships in all four major sports.

Every city you're traveling to is famous for certain kind of foods or has a special dish that is known for.

Boston is no different. There are several type of food you should try and not always what other likes may have the same taste for you.

Here is the list of some of famous restaurants in Boston and per the bostonmagazine.com: Alden & Harlow; Area Four; Asta, B&G Oysters; The Bancroft; Banyan Bar + Refuge; Bar Mezzana; Bistro du Midi; Bergamot....

If pizza is your favorite food then try Regina pizzeria... 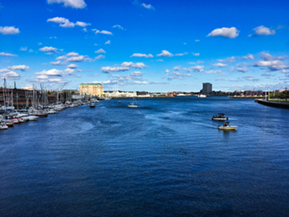 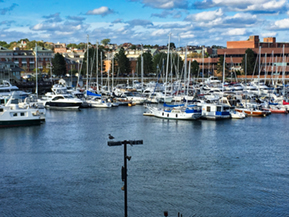 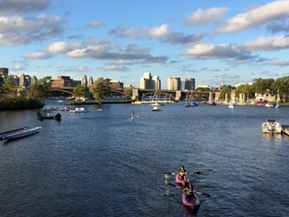 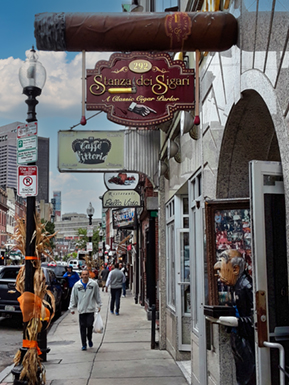 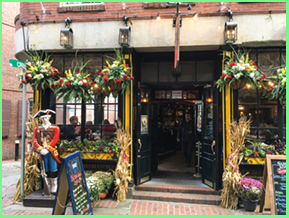 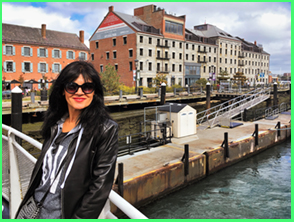 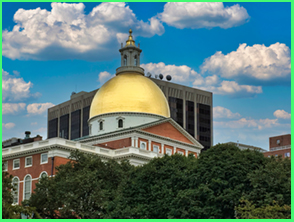 This is a small album with pictures of different downtown Boston details. The most of them are just self-explanatory, representing the real and unique Boston historic areas. Hope you'll enjoy watching them.

As of 2012 and according to U.S. Census Bureau data, 15.1% of Bostonians walked to work - the highest percentage among the major U.S. cities.

The biggest art theft to date occurred in Boston on March 18, 1990.

Boston is home to the first U.S. public beach

The first U.S. subway was build her

Boston was home to the first U.S. chocolate factory

'Happy Hours' are against the law

Boston is home to the oldest public park in the U.S