♦ Did you know a German invented the calculator and that Berlin has more bridges than Venice? Berlin boasts 960 bridges.

♦ Germany was the first country in the world to adopt Daylight saving time. This occured in 1916 in the midst of WWI

♦ It’s illegal to run out of fuel in the German Autobahn - although not forbidden. Having an empty tank of gas is not treated as an emergency.

♦ College education in Germany is free even for internationals − tuition fees for bachelor’s degrees in public universities was abolished in 2014.

♦ Germany is sometimes known as "the land of poets and thinkers": Bach, Beethoven and Goethe were all German, alongside composers Händel, Schumann, Mendelssohn, Brahms, Wagner and R. Strauss. Some of the world's greatest German philosophers include Kant, Hegel, Schopenhauer, Nietzsche, and Heidegger.

♦ Over 800 million currywurst are eaten in Germany each year − currywurst is a sausage served with a spicy sauce.

♦ Germany has more cultural activities and places than any other country − it's a cultured place, with 6,200 museums, 820 theatres, 130 professional orchestras and 8,800 libraries in 2013.

♦ Germany is one of the world's largest car producers - selling 6 million cars in 2015. VW's Golf is one of the best selling cars of all time.

Frauenkirche, Munich (Cathedral of Our Lady) 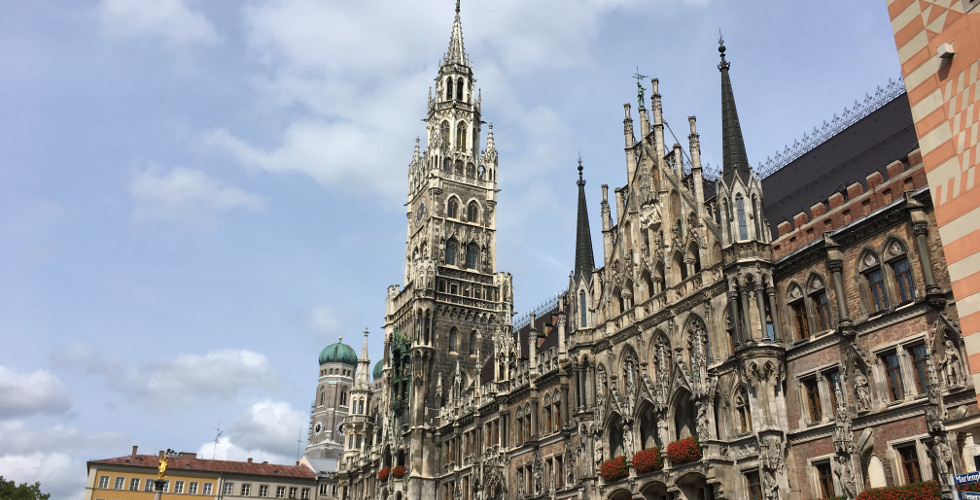 Munich's Isar River serves as a major attraction for both visitors and Munich's inhabitants.

JUSTIZPALAST Stachus Hall of Justice, the entrance to the old city Munich.

Residenz in central Munich is the former roayl palace.

Both onion domes of the Gothic cathedral and city parish church known as the Frauenkirche are symbol of the city of Munich.

One of beautiful store building facades in the center of Munich. 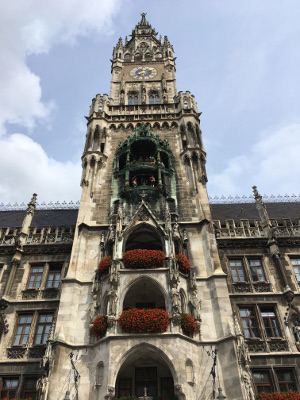 The tower of the New Town Hall houses the Glockenspiel, a 100-year old carillon. Every day the 32 life-sized figuers present dance shows. 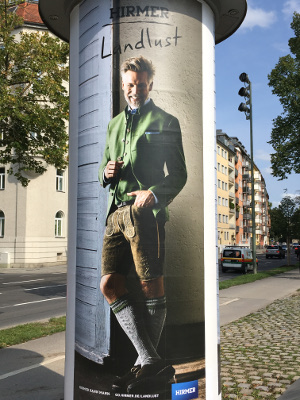 The Lederhosen and Dirndl are only a Bavarian tradition and therefore not worn throughout all of Germany nor are they worn all the time.

Munich is the capital city of Bavaria, Germany. It is located on the River Isar north of the Bavarian Alps. It is the third largest city in Germany, after Berlin and Hamburg with approximately 1.38 million inhabitants within Munich

The name München comes from the Old High German Munichen, meaning 'by the monks place', as the city was founded by monks and was first mentioned in 1158.

Often described as the city of laptops and lederhosen, Munich is an international center of business, engineering, research, and medicine that still maintains a rich cultural heritage and age-old traditions. While it's known for its beer houses, Munich also offers visitors art, culture, fine dining, and shopping. Post-World War II, the city rebuilt itself on a scale that few other places in Europe have been able to match. Many of its historic palaces, parks, and public squares were painstakingly renovated and restored. They now appear as though frozen in time centuries ago

Munich is known as the second largest publishing center worldwide, with about 250 publishing houses in the city. Well known writers from the area include Rainer Maria Rilke and Thomas Mann.

Black and gold - the colours of the Holy Roman Empire - have been the city’s official colours since the time of Ludwig the Bavarian.

The oldest building is a bathroom: During archaeological excavations at the Marienhof, workers found a latrine from 1260.

The Neues Kino Gabriel is most likely the oldest cinema in the world. It has existed since 1906 and it’s been open ever since.

The famous car manufacturer BMW headquarters is in Munich, and it even has the luxury of having its own zip code - 80788.

The Heilig-Geist-Kirche is located at the Viktualienmarkt since the 13th century. The church is decorated with a gothic-baroque fresco under the ceiling, and has one tiny, funny detail. It shows a man, dressed in blue, holding a pretzel.

There are no words to discribe this architectural masterpiece!!

Marienplatz square in the centre of Munich, with Town Hall. In the Middle Ages markets and tournaments were held in this city square. The Glockenspiel in the tower of the new city hall was inspired by these Tournaments, and attracts millions of tourists a year.
The Marian Column erected in 1638 simbolizer the end of Swedish occupation and is topped by a Golden statue of the Virgin Mary.

Every day at 11 a.m. and noon, hundreds of people gather in front of the tower to hear the Glockenspiel chime and watch the 32 life-sized figures reenact historical Bavarian events. This is also important meeting point.

Stachus is a large square in central Munich, southern Germany. The square was officially named Karlsplatz in 1797 after the unpopular Charles Theodore, Elector of Bavaria.
Munich natives seldom use that name, calling the square instead Stachus, after the pub Beim Stachus, once owned by Eustachius Föderl, that was located there until construction work for Karlsplatz began. Even the U-Bahn and S-Bahn announcements use the unofficial name.

Very importantly, in Bavaria beer is not considered alcohol but food. There are 20 major beer gardens in Munich.

Munich is home of the annual Oktoberfest, a world known beer festival for two weeks.

The bavarian costume is called Tracht. Men wear the typical Lederhosen while women have the boob boosting Dirndl. It is more common to see people wearing their Tracht during a special occasions such as a beer festival.

Being on time is very known habit here; being late is considered as inappropriate and not respectful behavior

Bavarian cooking is hearty and rustic, making very simple ingredients into tasty, satisfying dishes. It is known for its wide variety of Wurst (sausages), meat dishes, Knödel (dumplings) and pasta dishes, as well as for its breads, its sweet dishes and its desserts. Bread is not only eaten for breakfast, it is also used as filling in Knödel, poultry, and roasts. And we cannot forget about the world famous Brezen. The Weisswurst should be eaten with the hands, without fork and knife and with a dip of sweet mustard.

Frankfurt may be best known as the business and finance capital of Germany, but it is also one of the most desirable cities to live in and visit. With a rich collection of museums, historic buildings and a lively art and culture scene, Frankfurt is a surprisingly impressive place for a weekend break

The city's name comes from Emperor Charlemagne, who referred to the settlement as "Franconovud", or "Ford of the Franks", in 794 when he built himself a royal council there. Before Charlemagne, settlements had apparently already existed in the area for hundreds of years, as the Romans built a town there along the nearby Roman Road.

Throughout the Holy Roman Empire, new kings were elected here ▼

The Holy Roman Empire began in the early Middle Ages and continued until the early 1800s, occupying modern-day Germany, Austria, Switzerland, Belgium and the Netherlands for ten centuries. In 1356, Frankfurt was chosen as the permanent site for the election of emperors and then kings of the Empire. This continued for 400 years, ending with the coronation of the last Holy Roman Emperor, Habsburg Franz II, in 1792. From 1564 kings were also crowned there.

It is estimated that there are 180 different nationalities living in Frankfurt and almost one in three people living there do not hold a German passport. Due to Frankfurt's thriving financial trade, thousands of foreigners move to the city every year.

Both sides of the Main river are lined with an array of top museums. The southern bank alone is home of nine museums, including the German museum of architecture.

Seats of the European Central Bank (ECB) Headquarters is in Frankfurt. The European Central Bank (ECB) is the central bank for the euro and administers monetary policy of the eurozone, which consists of 19 EU member states and is one of the largest currency areas in the world.
Frankfurter Wertpapierbörse (FWB®, the Frankfurt Stock Exchange) is one of the world's largest trading centres for securities. With a share in turnover of more than 85 per cent, it is the largest of Germany's seven stock exchanges. Deutsche Börse AG operates the Frankfurt Stock Exchange, an entity under public law.
Out of the 15 tallest skyscrapers in Germany 14 stand in Frankfurt.

Frankfurt is home of the third largest airport in Europe and the tenth busiest worldwide, with an average of 56 million passengers each year. The airport's baggage system is 67 km long handling more than 2 million tons of cargo. 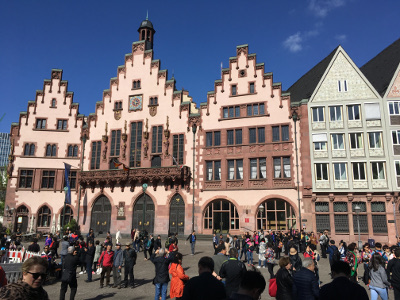 The Römer is the city hall of Frankfurt....

The Römer is one of Frankfurt's most important landmarks. Consisting of three gabled houses, it presides over the Römerberg square, and has been Frankfurt's city hall for over 600 years. There are various explanations where the name "Römer" derives from and according to the City of Frankfurt, that name has something to do with Italian merchants who used to hold fares here in medieval years.

These oldest halls within the Römer, Römerhalle and Schwanenhalle, still look like they would have 600 years ago. The first Frankfurt book fairs took place in these halls, as did other fairs where merchants would sell their products. The massive structures of these rooms have survived the bombardmends of WWII basically undamaged.

Paulsplatz (in English: St Paul's Square) is a historic square in the heart of Frankfurt, Germany. St Paul's Church is located here, dominating the square. The Römerberg, another square, is to the south. Berliner Strasse is immediately to the north. Paulsplatz is a major location for the outdoor Frankfurt Christmas Market. 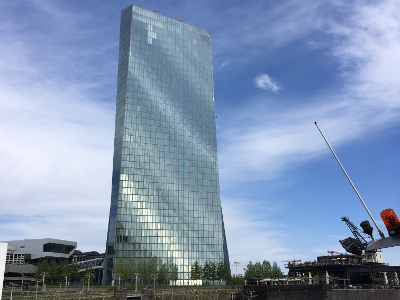 Frankfurt is the EU financial centre....

Frankfurt is sweeping aside rivals to become the dominant financial centre of the European Union after Brexit. Some of the globe's biggest banks have decided to rent more office space in Frankfurt, bolstering Germany's financial hub after months of divorce talks between Britain and the EU.

The ECB chose the site of the Grossmarkthalle (Frankfurt's former wholesale market hall) to build its new premises. After completion of the construction works, the ECB began operating in November 2014 from a modern and functional building that was built to meet its specific requirements.

Along with the Frankfurt book fair as the biggest book and media fain in the world and the Frankfurt Stock Exchange, the tax-free shopping is adding more value on the overall financial power. Here

Those looking for top designer buys are likely to find what they need in the Zeil - Frankfurt's popular shopping street. 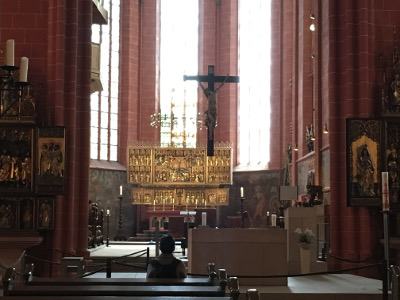 Frankfurt's Roman Catholic Gothic church is officially known as the Cathedral of Saint Bartholomew (Kaiserdom Sankt Bartholomaus) or Frankfurt Cathedral (Frankfurter Dom). Its impressive 95 meter tower and spire dominate the city skyline, and it is considered the largest religious building in Frankfurt. Despite its title, Kaiserdom has never been the seat of a bishop and is therefore not officially a cathedral.

The current building is the third church to be built on the plot. Building on the first church began in 1356, although it was only completed in 1793. After a fire in 1867, the cathedral was rebuilt, while Allied bombings in 1944 destroyed the entire interior and left a shell. The cathedral was thus rebuilt for the third time after World War II.

The 328 step climb is definitely worth the effort, to enjoy a superb view over the city.